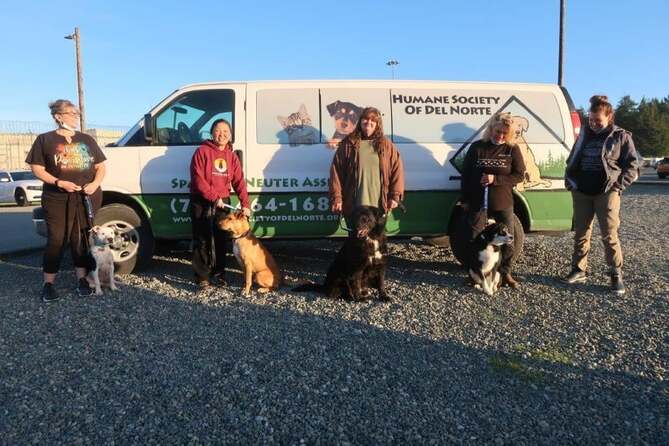 It has been a dream for A LONG time....now it's reality! Humane Society of Del Norte has partnered with Pelican Bay State Prison to provide a dog-training program that will give dog pound dogs the basic skills they'll need to help them get adopted into loving homes.

Four dogs have been chosen from the Del Norte County Dog Pound. Three of the four dogs had been victims of abuse or neglect and were part of a law enforcement seizure that landed them at the county dog pound. As most know, our local dog pound is always full. We (Del Norte County) are small area with limited resources which makes it difficult to get the pound dogs noticed and adopted. Staff and volunteers at the dog pound work extremely hard to care for the dogs and keep them happy during their stay at the Washington Blvd. facility. Humane Society of Del Norte has seen the struggle for years and we want to help the dog pound in as many ways as we can.
Danielle Larsen-Wheeler (HSDN President) has wanted to bring a program pairing shelter dogs with prisoners to Pelican Bay since about 1996, even going as far as to discuss it with the institution’s warden at the time. It just wasn't the right time, but she never gave up the idea. Once interest in the program sparked within the walls of Pelican Bay State Prison, we began working hard on bringing the Prison Paws Partnership program to the prison.

The process took about four years to finally get to the point where we are now. Our mission is to help the dogs with social behavior, trust, & basic skills that will be highlighted on an adoption profile in hopes of placing the dogs into a home at the program's end. We also know this will help the inmates learn skills as the program brings a level of humanity that builds self-esteem and confidence, teaches responsibility, patience, and compassion. All it takes is one trip into the facility to see how much each inmate handler cares for their dog in training, and how invested they are in seeing this dog through to graduation. We are extremely excited to see this program finally getting underway!

Eight inmates in the prison’s Facility D will take part in the first round of the new Prison Paws Partnership program. The men who were interested in becoming inmate dog handlers had to go through a multi-step interview process before being able to work with the dogs. The interview panel was comprised of several members of both Humane Society of Del Norte and Pelican Bay State Prison staff. Approximately 14 prisoners expressed interest and applied for the program. We narrowed it down to eight by the end of the process.
​​The four beautiful dogs chosen from the Del Norte County Dog Pound were each matched with a Pelican Bay State Prison inmate handler (& alternate handler) for a 6-week training course. Larsen-Wheeler, Bennett, dog pound volunteer Laureen Yamakido, animal control officer Brittany Pratt, and Karrie Hall, owner of Karrie’s Kanine Academy, introduced the four pups — Millie, PeeWee, Baron and Max — to the inmates on Tuesday, November 30th.

It was a beautiful thing to watch as the dogs decided which person they'd like to pair up with for the program. Baron made it known right away that he'd like to hang out with Walker, one of the guys chosen to be a handler for the first round of training. For six weeks, Walker and his fellow inmates will socialize Baron and his three furry friends who would otherwise be in kennels at the county animal shelter awaiting adoption. Once the four pups graduate from the program, they’ll hopefully move into the perfect home.
Dog trainer Karrie Hall of Karrie's Kanine Academy has been visiting the prison twice weekly to teach the inmate handlers what they'll need to know about training dogs. As we move into week two of training, Karrie reports that the guys are great and are showing that they really want to do their best for the dogs. Karrie gets a lot of information through assessing the behavior of the dogs and how they relate to their new handlers and to her. Overall, she is extremely pleased and surprised at how well the dogs and handlers have done so far. She is very dedicated to the success of Prison Paws Partnership and we are pleased to have her on board.

A lot of planning, time, and money has been invested into the Prison Paws Partnership and as with any new venture, it will be a learning process with possible slight changes needed as we move along, but so far, everything is working the way we had hoped. We received a very generous donation of $2,500 from Courtney Minik to help us get started. This money as well as a few other donations from community members made it possible for us to purchase items and supplies that were needed prior to taking the dogs to the prison. Our little cat shelter is 100% non-profit and 100% volunteer staffed, so donations are what make things like this possible, so thank you so much to everyone who stands beside us and supports us. We appreciate you! HSDN is working on grant and sponsorship letters in hopes of finding long-term support for PPP. In the meantime, we appreciate the help we receive from our community.

Since its launch in November, Prison Paws Partnership has received an out-pouring of positive feedback from community members. The new PPP Facebook page was active immediately after it was launched, buzzing with positivity and excitement over the program. There have only been a few slightly negative responses to the program so far, but with some explanation, time to see the program in action, and the ability to see both sides, those who doubt will be able to see the bigger picture and maybe even support the idea. Here is an example of one comment and the Humane Society of Del Norte's response...

Follower's Comment - I just hope these dogs are treated right. A dog doesn't have to be trained to get a home. I've gotten dogs from the pound or shelter and I've loved and taught them to behave after I got them. I feel in a way this is sad because the dog starts to bond with the person in the prison, only to go back to the shelter. The shelters should hold more events at parks or other places around towns so people will see them easier. I don't know why the shelters don't. This is just my suggestion.

HSDN's Response (Bennett) - Everyone is entitled to their own opinion & feelings. I'd just like to comment on a couple of your points.... You are correct, a dog doesn't have to be trained in order to get a home, but ALL dogs could use & would benefit from training of some kind. The pound dogs bond with dog pound volunteers who spend an hour or so daily to walk & feed them too. What is wrong with them getting 24/7 love, attention, & training while they are in limbo between street & new home? The training program offers them basic skills & the Canine Good Citizen course. This is good exercise for the dogs & it's fun for them! The dogs will not be going back to the dog pound after training. Our goal is to have them adopted into homes by the end of the 6-week program. If not adopted, we have foster homes lined up for them until they are adopted. The dog pound is a county facility with limited staff...this makes doing public events quite difficult. They do hold adoption events at the facility. The dog pound is also Del Norte County Animal Control & with a small facility, is always full. Humane Society of Del Norte's Prison Paws Partnership is a way that we (volunteers from the cat shelter) could help the dogs of our community. I think if you follow this first round of our program, you may see things a little differently...if not, that's ok too.

HSDN has already received and approved an adoption application for one of the PPP dogs and there is a lot of interest in the other three. If the public is interested in adopting a PPP dog, click the Adoption Application link below. Please be sure to read the Adoption Guidelines before submitting an application. If you'd prefer a paper application, reach out to Humane Society of Del Norte at 707-464-1686.

We would like to thank Robert Losacco & Jill Brown (Pelican Bay State Prison) for being our voices on the inside & helping make things happen. Thanks so much to the inmate dog handlers for believing in our vision & being willing/eager to be a part of it. Many thanks to the Prison employees, Del Norte County Dog Pound staff and volunteers, & our HSDN volunteers for working so hard to help make Prison Paws Partnership a reality.
We will update as we get further into training.

If businesses or individuals would like to donate for training costs, dog food, dog toys, dog crates, beds, blankets, or any of the other dog needs, reach out to Eileen Bennett at prisonpawspartnership@gmail.com or 707-464-1686 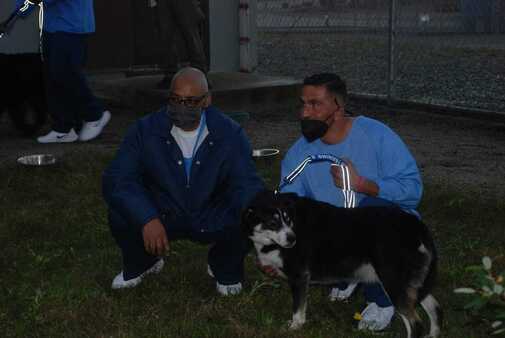